A friend of mine asked me if I could create a stir-fry recipe that was easy and quick to cook and also didn’t have a strong ginger flavor.  I decided to play around with some Thai flavors, although I have to say I don’t think this dish is a traditional Thai one.  It’s a mixture of veggies and flavors I enjoy eating and it’s not too spicy – unless that’s how you want to make it!

First I prepped all the veggies and chicken because it’s a quick cooking dish and you need to have your ingredients ready before you start cooking.

I used a mix of sliced chicken breasts and thighs and started cooking the thighs first as they take a little longer. 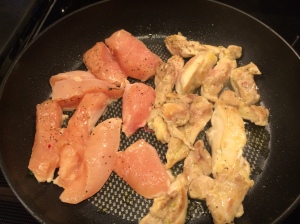 After the chicken was done I put it into a bowl and added the veggies.  First the mushrooms so they could get browned, then the onions, peppers, green onions and carrots. 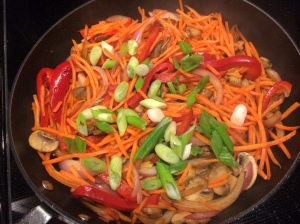 Then I made a little dent in the veggies and added minced garlic, some natural style peanut butter, and the Thai red curry paste.  I poured in a bit of light soy sauce and rice wine vinegar and the juice from a whole lime. 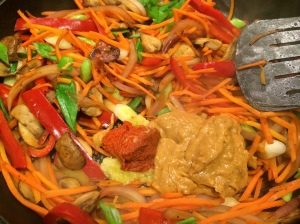 I added the broccoli and some light coconut milk, a dash of siracha and a little more soy sauce, stirred it really well and let the broccoli steam for a couple of minutes.  Then I added the chicken back in, a bit of baby spinach and some chopped cilantro and mixed it all together and served it up! 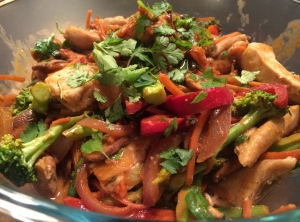 1-2 cups chopped broccoli (depends on how much you like it!)

juice of one lime

In a hot pan pour a couple of tablespoons of canola oil and add the chicken thighs, cook on one side, and then add the breasts.  Cook until done and put into a large bowl. Next add the mushrooms to the hot pan and quickly brown them.  Stir in the red onions, peppers, and carrots and stir everything together.  After that has cooked for a couple of minutes make a dent in the veggies and put in the garlic, curry paste, and peanut butter.  Pour in half of the soy sauce, the Tamari, the vinegar and the lime juice.  Stir together.  Add the broccoli, the rest of the soy sauce, a dash of Siracha (depends how spicy you want it) and the coconut milk.  Let it simmer for a couple of minutes and then stir in the chicken, spinach and half the cilantro.  After a minute or two everything should be heated through and ready. Taste it for salt and flavor – it it’s too thick add a bit more coconut milk, if it’s too thin add a bit more peanut butter.  Sprinkle each serving with the rest of the cilantro.  (if you don’t like cilantro use Italian parsley.)

Serving suggestions:  You can serve this over your favorite rice or noodles, but I served it over spinach for less carbs.  If you want an even faster meal you can substitute shredded rotisserie chicken instead of cooking it yourself.  It’s also a very tasty dish with shrimp – simply cook peeled and deveined shrimp in a bit of oil before making the veggies and stir in at the end.

You could also make this a vegetarian dish by using tofu instead of chicken.  Just drain and dry tofu, cut it into bite sized pieces, and crisp it in a little oil at the beginning of cooking.  Make sure it’s quite dry or it will spatter in the oil.